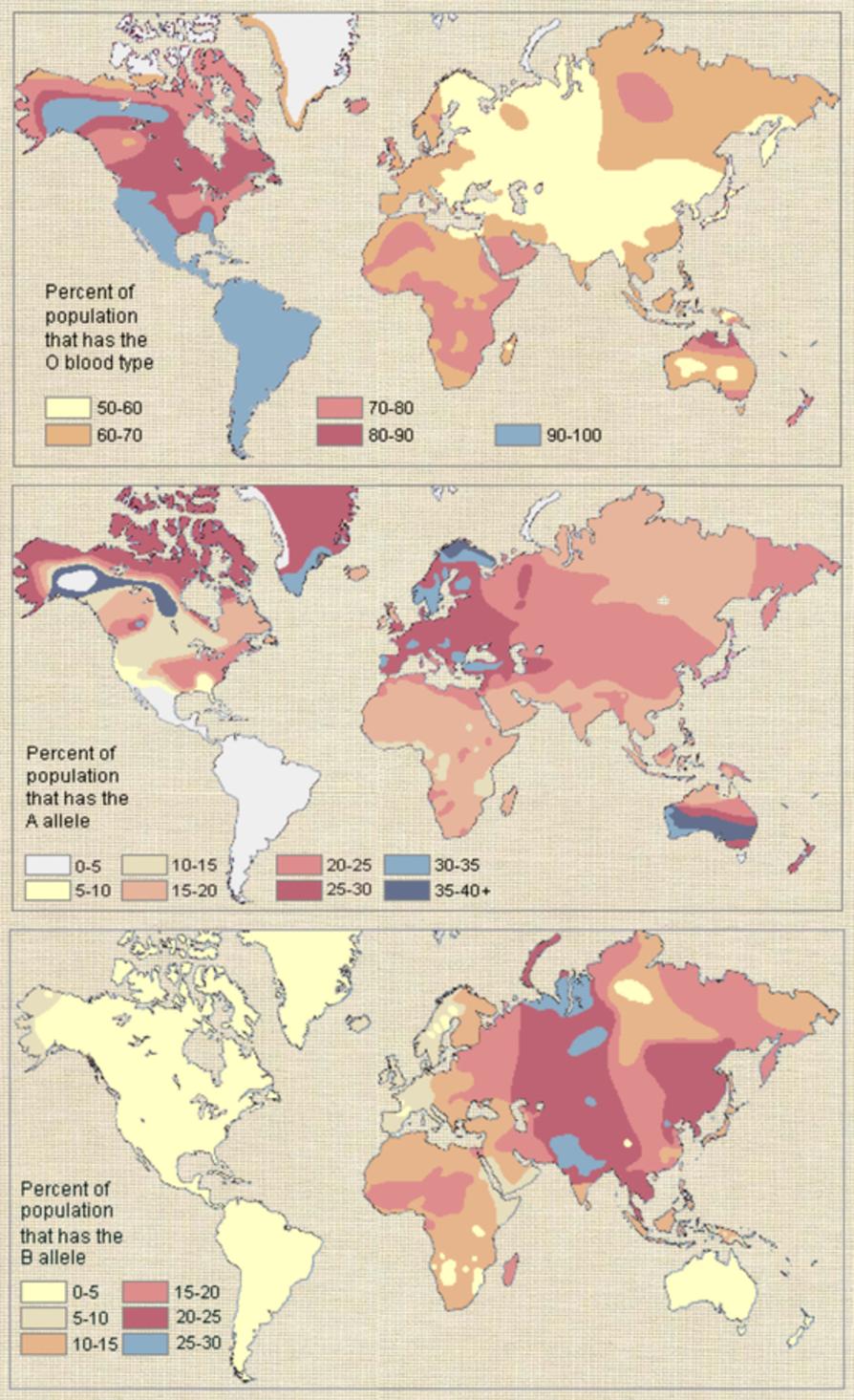 Individuals of Type O blood have the thinnest blood, strongest immune systems, strongest stomach acids, and live the longest of all the blood types. Genetically, stomach acid was needed to break down the high fiber plant protein diets on which our original ancestors thrived.

This very strong acid is used to break down acid completely and since plant based diet is considered man-kinds original food source. With reference as example, to the Garden of Eden, Adam & Eve ( O - ), and the further evolution of ( + ) Rheus monkey integration. As food sources changed. the type O was able to adapt for survival and metabolizing almost any food, because of their strong stomach acid digestion chyme. ( O - ) type is considered the Adam & Eve human evolution type and has the strongest immune system. It is the universal donor, and it cannot receive from the other considered less pure human blood types.

We all want to eat right, but for most of us it is a guessing game. Type O's can metabolize more food sources, as a result of their strong digestion enzymes, than any other blood type. For this reason they more easily acquire proper nutrition with the least amount of effort. All other blood types must acquire proper nutrition with combinations of foods compatible with

Considered by many scientist to be the oldest common earth animal blood type, as example of the monkey and chimpanzee. The first mutation from human blood type O was blood type A.

The Chimpanzee ( A ) and Human ( O ) genome diverged 6 million years ago. They have 98% genetic identity. Humans ( O ) and the Rheus ( + ) old world monkey, apparently shares about 93% of their DNA sequence and shared a common ancestor roughly 25 million years ago.

Assorted human blood types came about when people domesticated to farming and started to migrate to places which had no abundant wild animals to feed on. Since human type A mutated from type O, this blood type is very similar to type O and can eat many of the same plant based diet proteins, that can be consumed by blood type O.

It is believed that many type A's which got used to eating from the environment adapted to more of a vegetarian diet. These adaptations occurred due to survival of the fittest and domesticated readily available food resources. There are many different theories of why type A's work best as plant based diet vegans. Some may have been carrying the integrated O recessive gene, thereby allowing them many of the characteristics of the O gene individuals. The A blood type is the only partially mutated gene and this is still a mystery to all anthropologists.

Individuals of type A blood have the thickest blood of all types. Since the blood is thick as it moves through arteries and veins, especially after or during periods of sleep, any saturated fat in the bloodstream has an opportunity to deposit itself more easily. When type A's eat animal or dairy products inconsistent with their blood type, their already thick blood agglutinates,

or gets thicker and stickier.

Once your blood thickens this will lower immune functions, thereby causing or increasing the chances of cancer to develop. While the A blood type does a great job to metabolize fruits and vegetables it does a terrible job metabolizing animal fats and proteins.

In the United States 40% of the population is type A.

Research shows that most cancers are type A related, and the majority of A's eat a animal and potato diet, along with lots of foods unsuitable for their type. It is predictable this blood type would be overwhelmed with high blood pressure, diabetes, anemia, cancer, and heart disease.

Type ( B ) blood was the third mutation through man's evolution after types ( O ) and ( A ). Individuals of the B type group share some characteristics of types O and A. Although they represent a mix of the two previous blood types in some ways, there are some very notable exceptions. The closest relatives of Gorillas ( B ) are Chimpanzees ( A ) and Humans ( O ). All of the Homininae having diverged from a common ancestor about 7 million years ago. Human gene sequences differ only 1.6% on average, from the sequences of corresponding Gorilla genes.

Despite the Chimpanzees ( A ) being the closest extant relatives of Humans ( O ). The Human

( O ) genome was found to be 15% more like that of the Gorilla ( B ). In addition, 30% of the Gorilla genome is closer to human or Chimpanzee than the latter are to each other. This is rarer around coding genes, indicating pervasive selection throughout great ape evolution, and has functional consequences in dominant gene expression. Analysis of the Gorilla genome has cast doubt on the idea that the rapid evolution of the hearing genes gave rise to language in humans, as hearing evolution also occurred in Gorillas.

Type ( B ) blood is not as thin as type ( O ) blood, nor is it as thick as type ( A ) blood. Type B individuals have the ability to eat and metabolize dairy products, which both type O and type A do not tolerate very well. It has been discovered individuals of type B tend to contract diseases such as polio, lupus, and rare disorders as Lou Gehrig's.

Type B's average the second longest life span after type O's, which have been living the longest since the beginning of time. Type B's have also been found to be the second most muscular types compared to type O's. Even though type B's can build muscle similar to type O's, most B's have been found to gravitate more to coaching sports, rather than playing them. More type B's can be found in the fields of medicine, science, technology, lawyers, and judges.

in our environment, but blood type ( AB ) did not.

Blood type ( AB ) is the only blood type with two dominant traits. If a parent of blood type ( O ) mixes with a parent of blood type ( A ), the trait being dominant will prevail more times that the recessive donor trait ( O ). The same holds true for ( B ) which is dominant over ( O ), in regards to donor and receiver. For most blood type O's this theory doesn't sound too attractive. When an ( A ) parent mixes with a ( B ) parent, the outcome genetically speaking should be either A or B, not ( AB ). In any case, ( AB ) exists and only represents about 2% of our population worldwide.

Many scientist think that in the next few centuries, we might have another mutation to a fifth blood type, which might encompass all blood types. Some would argue that this new adapted blood type would be less susceptible to all of the diseases that strike the known types the hardest, and as such, this is natures way of evolving to insure the survival of the species.

* Gorillas ( B ) have blood type ( B ) and ( O ), but 'Never' blood type ( A ).
Some evolutionary scientists believe the gorilla to be the ancestor of Neanderthal man.

* Baboons ( AB ) have been found to possess ( AB ) and ( O ) blood types. The hominoids, humans and the great apes, express the A, B, O antigens on red blood cells, but baboons do not. In baboons, the antigens were found in other tissue cells.

Baboons ( AB ) are African Arabian Old World monkeys belonging to the genus Papio. The five species of Baboons are some of the largest non-hominoid members of the primate order.

A, B, O  Personality

The Gorilla ( B ) type personality, is more devout in a monogamous family relationship

and marry for life, as similar to the human religious marriage ceremony.

The Chimpanzee ( A ) type personality, is more spontaneous of playful relationships. As example the chimpanzee may genetically breed with the best available uncommitted playmate at the time.

A mixed parent blood type infant will have a dominant type physiological chemistry, mostly based on the factors of donor and receiver, as noted by the blood types immunity system nature. A common personalty type behavior, will reflect upon the evolution adaption of a mixed type.

As example, an ( O ) type body chemistry has a natural  immune system to A, B, AB and can donate to those types, but those types cannot donate to an ( O ), without cause of stress on the O type body chemistry. It is best for physical and spiritual well being to be in a relationship with a common type, or be on the receiving end of a donor, in a mixed type relationship.

In 1931 in Japan. Furukawa Takeji (1891–1940) proposed that there was a link between blood type and personality after working in the administration department of a high school and observing the temperamental differences between applicants. A great deal of research went into blood psychology in the 50’s, 60’s and 70’s, mainly in Japan. Masahiko and Toshitaka Nomi, a father and son team, were responsible for making this a mainstream science, having researched the way in which blood type affects every area of our lives,

including relationships, work and leisure.

In Japan, blood type has influenced peoples lives in unexpected ways. For instance, some Japanese companies have planned departments around the blood types of their workforce. Interestingly, 90% of the Japanese know their blood type, although whether this is the reason the fad became so popular or a consequence of its popularity is not certain. In contrast, their European and American peers are blissfully unaware of not only their blood type,

but also the “blood typology” phenomenon.

Publishing the ethnic and the racial differences in Blood type is not, in the present-day world, considered to be politically correct. We compile and maintain this database through often times confidential sources. Every Blood gathering entity in the world must gather this information to stay in business, but almost every one of them is afraid to publish the racial and ethnic differences in Blood type, given the emotionally charged political climate

A B O  Type Country Distribution

Blood provides an ideal opportunity for the study of human variation without cultural prejudice. It can be easily classified for many different genetically inherited blood typing systems. Also significant is the fact that we rarely take blood types into consideration in selecting mates. In addition, few people know their own type today and no one did a century ago. As a result, differences in blood type frequencies around the world are most likely due to other factors than social discrimination. All human populations share the same 27 known blood systems, although they differ in the frequencies of specific types. Given the evolutionary closeness of apes and monkeys to our species, it is not surprising that some of them share a number of blood typing systems with us as well. You inherited your blood types from your parents and

the environment in which you live can not change them. 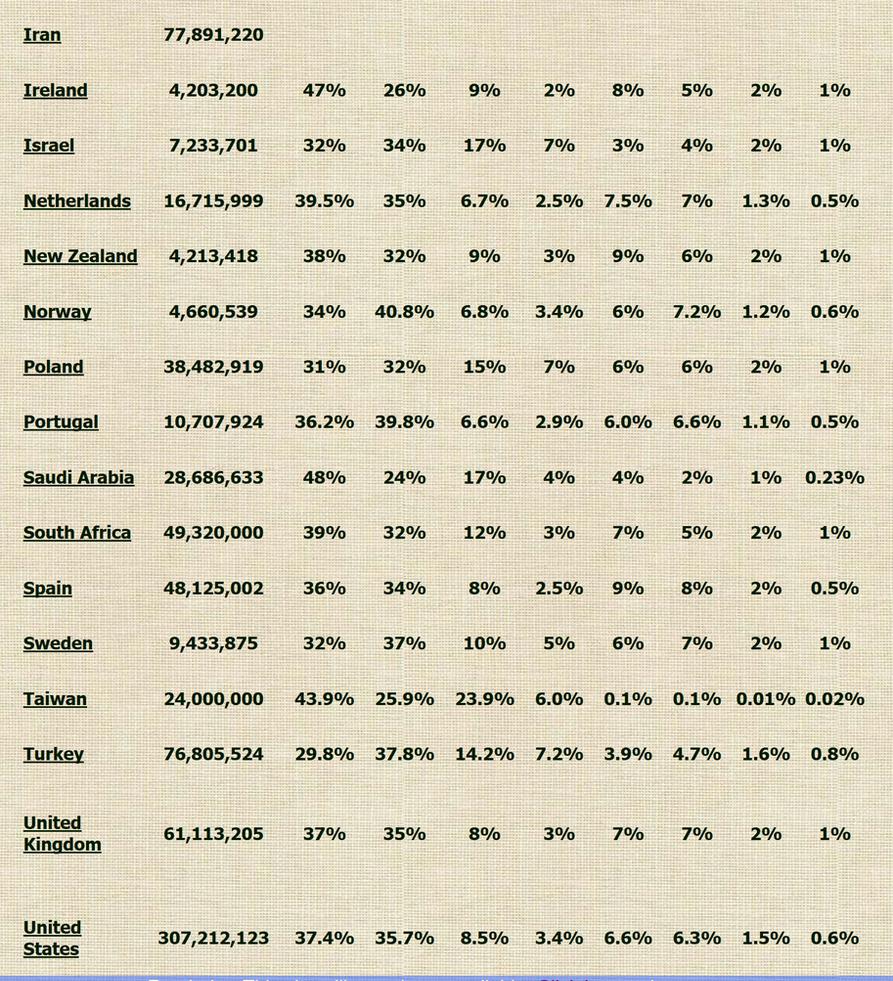 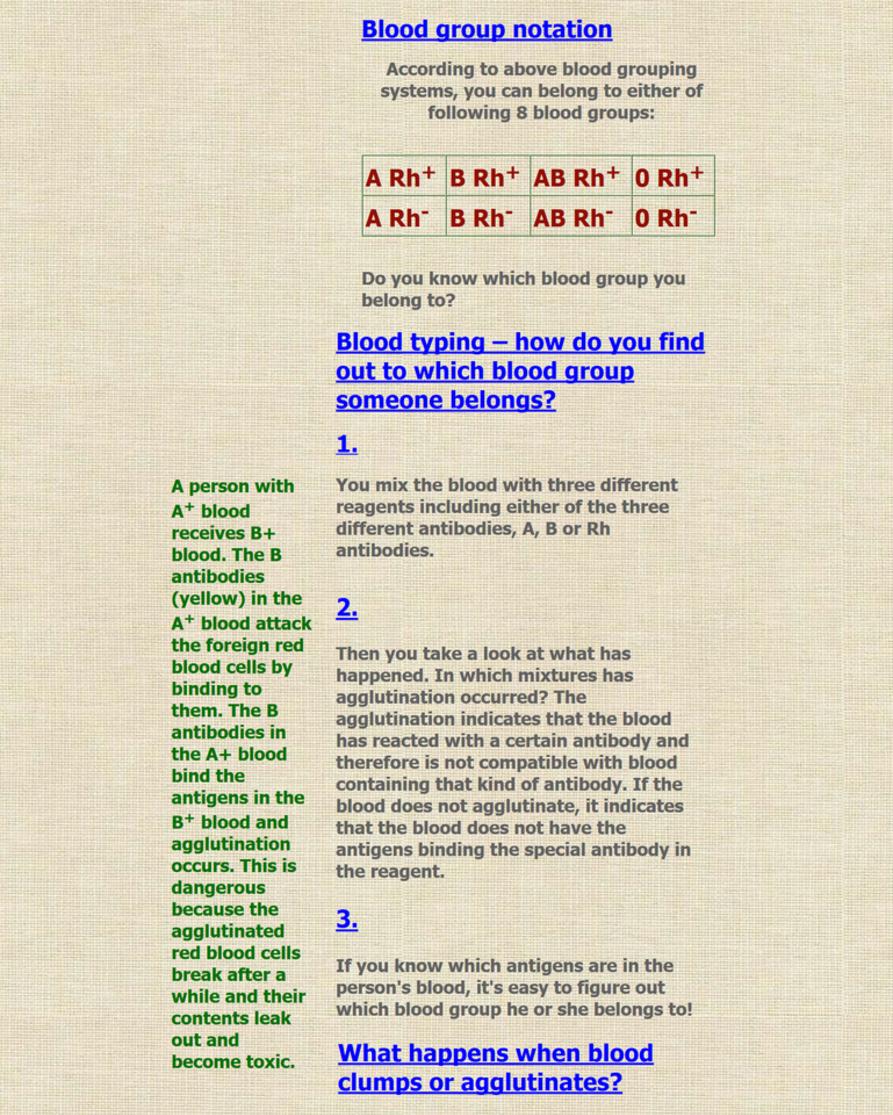 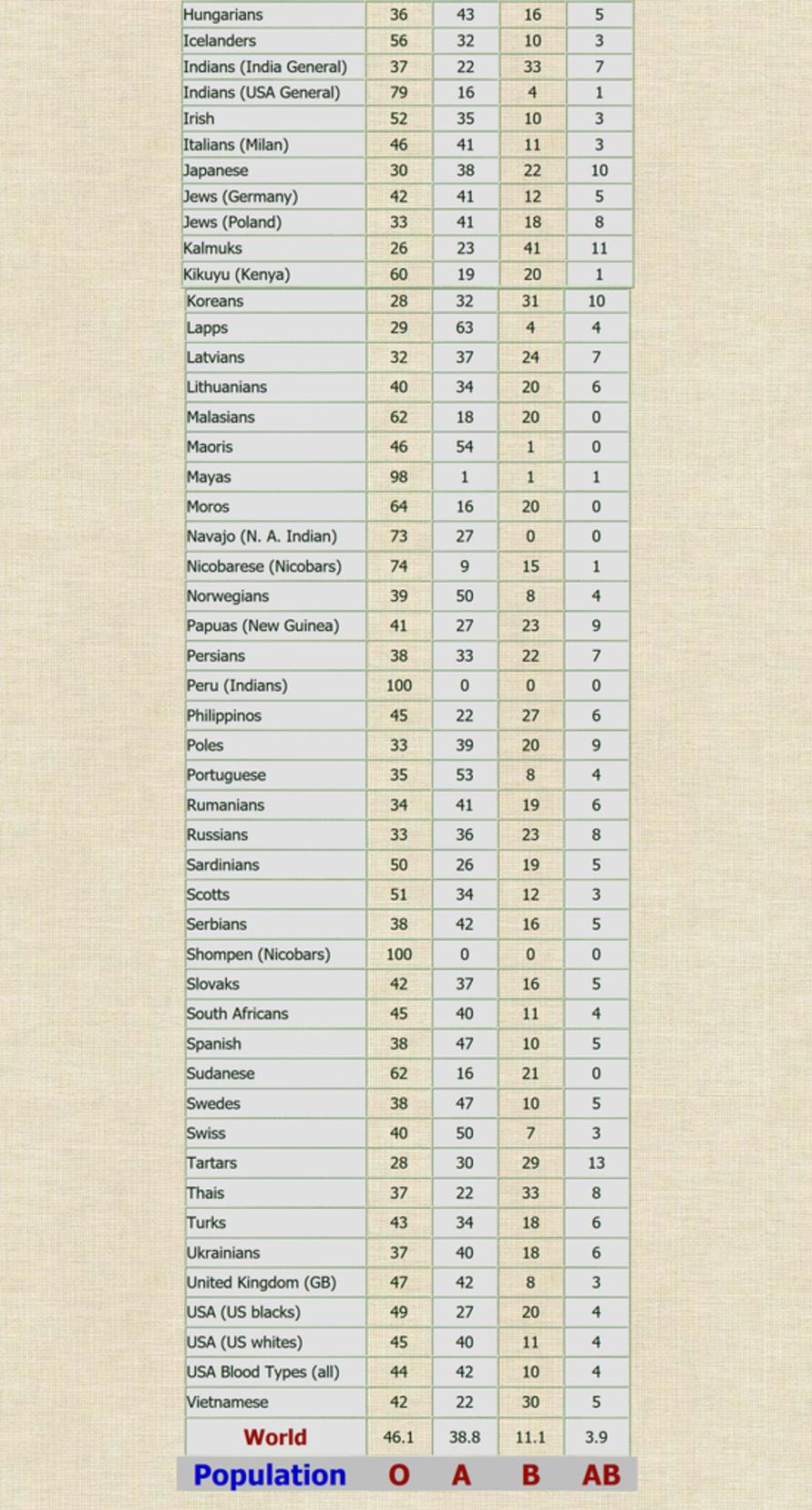 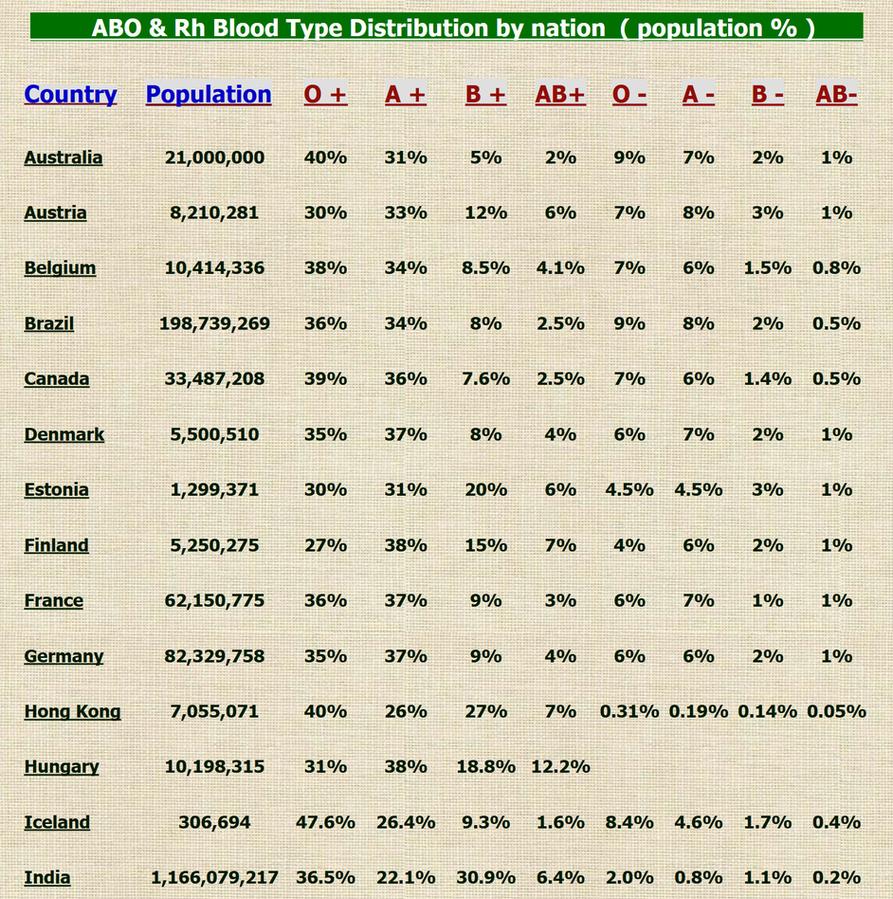 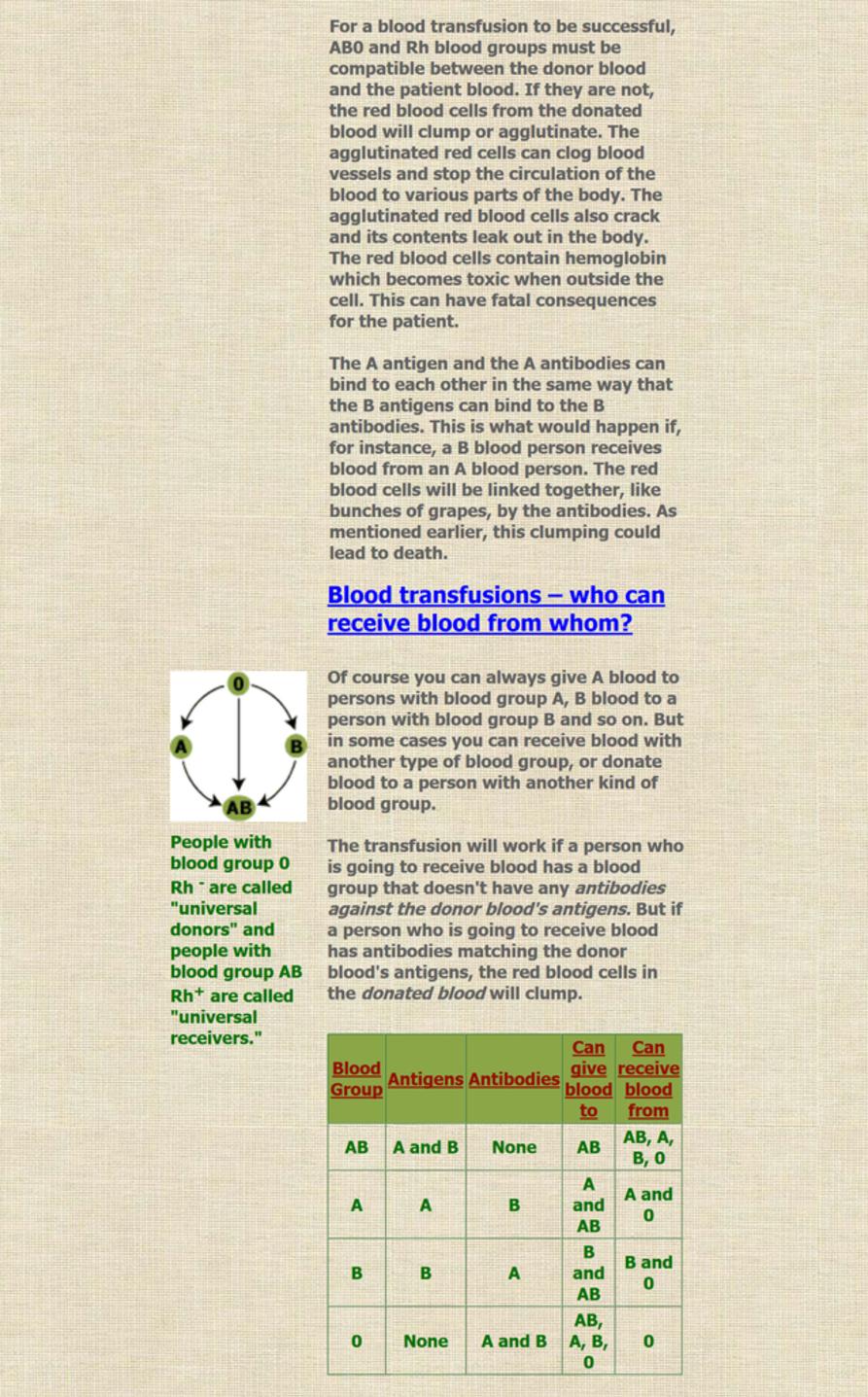 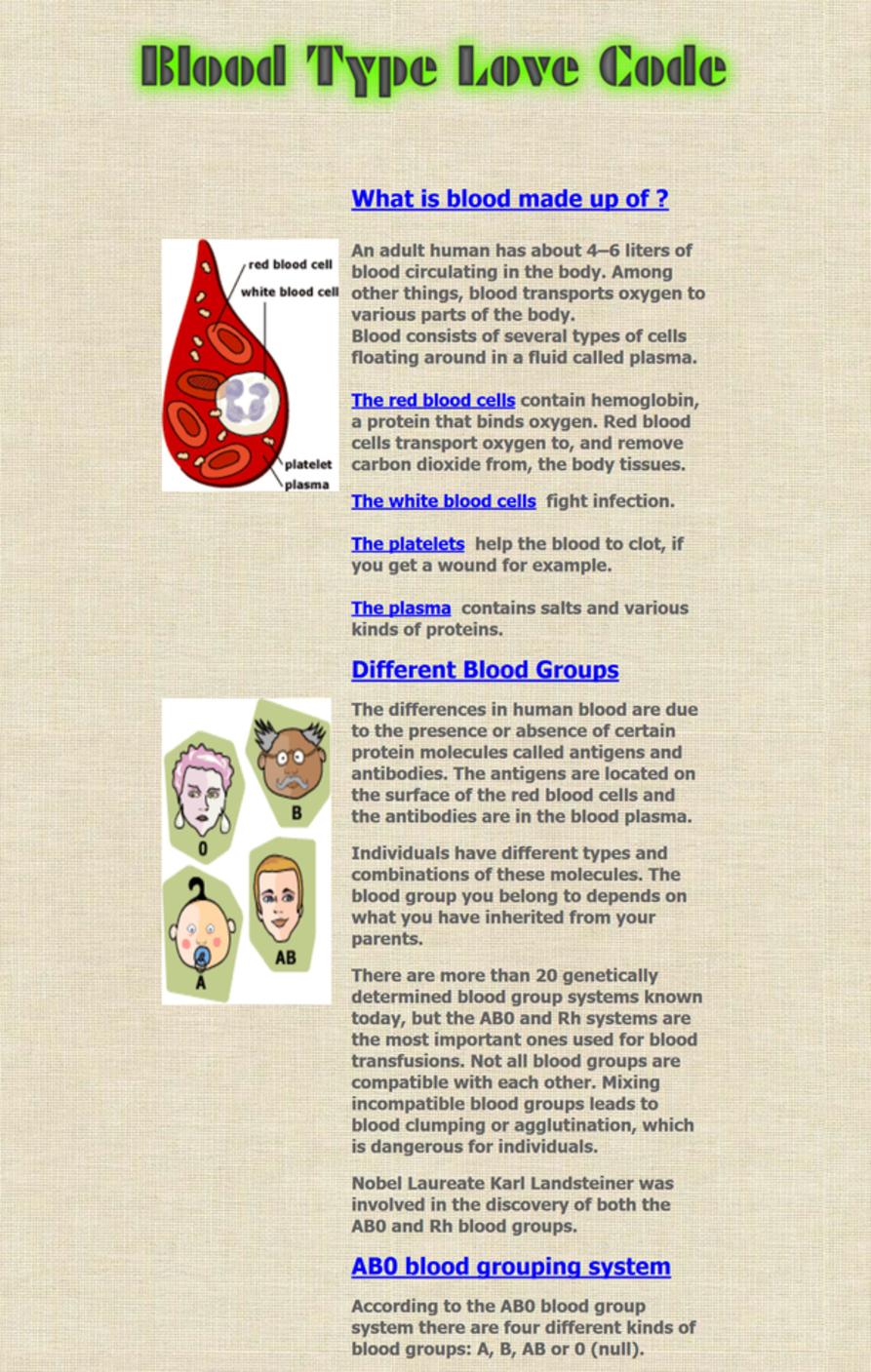 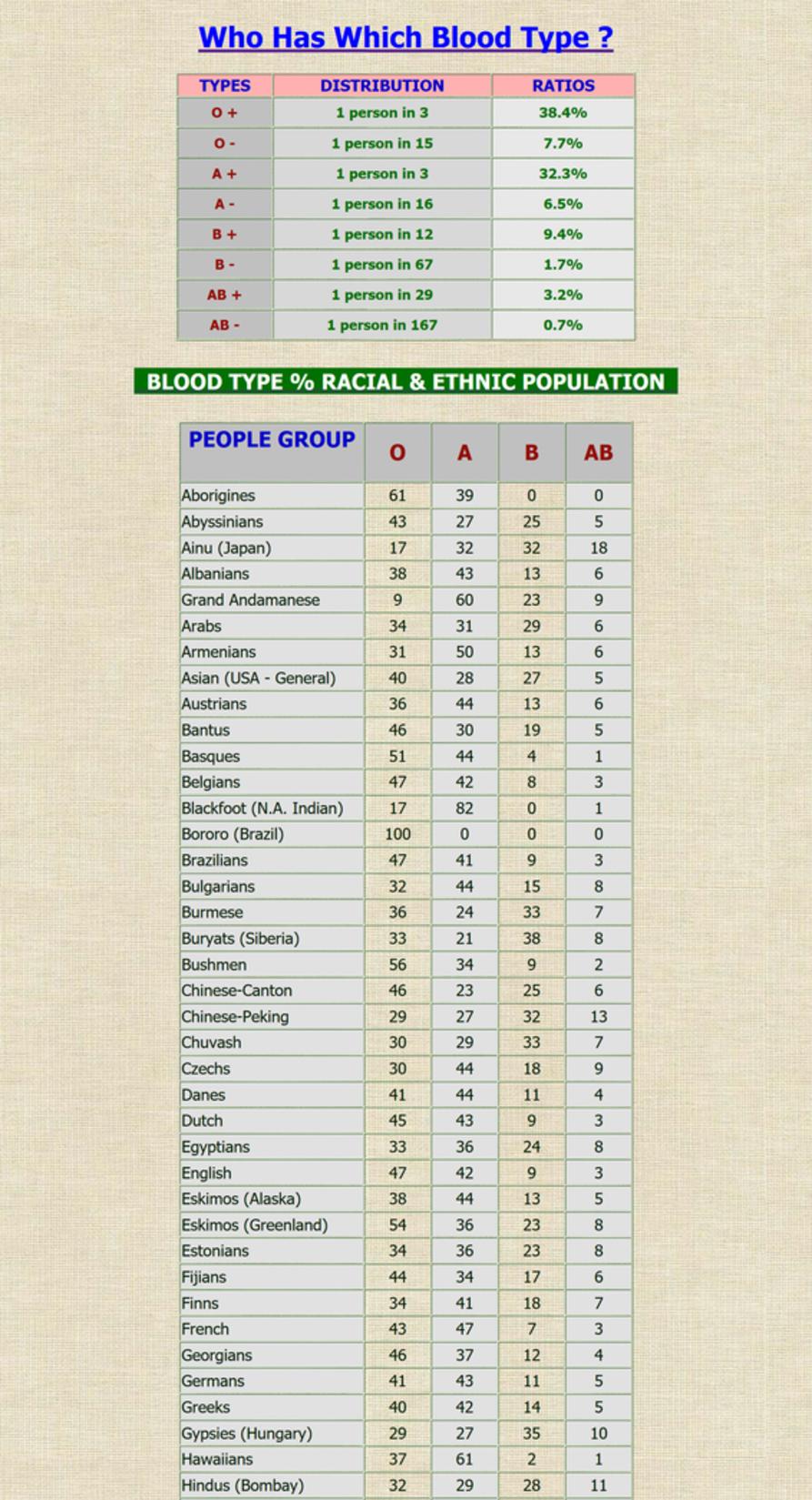 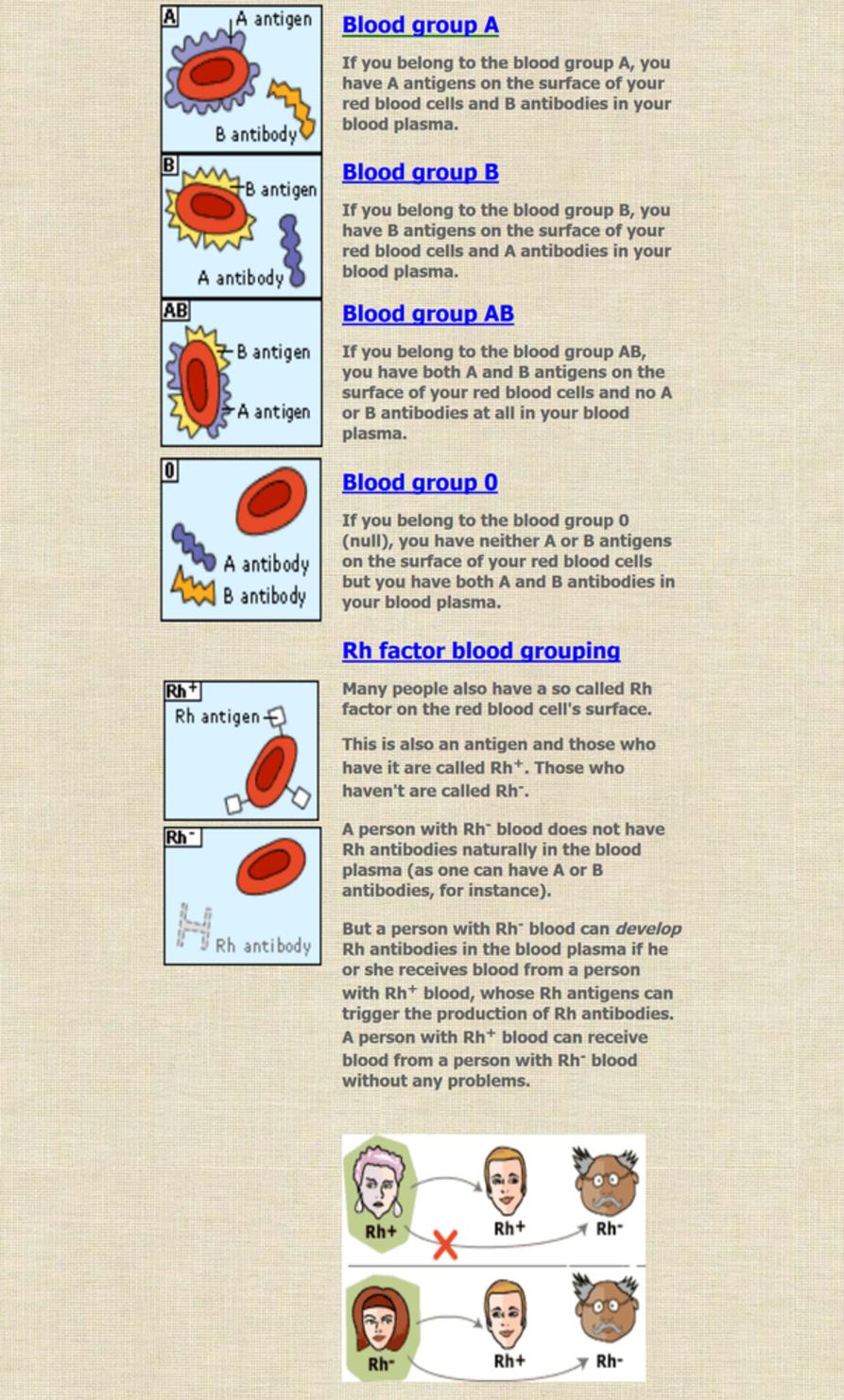