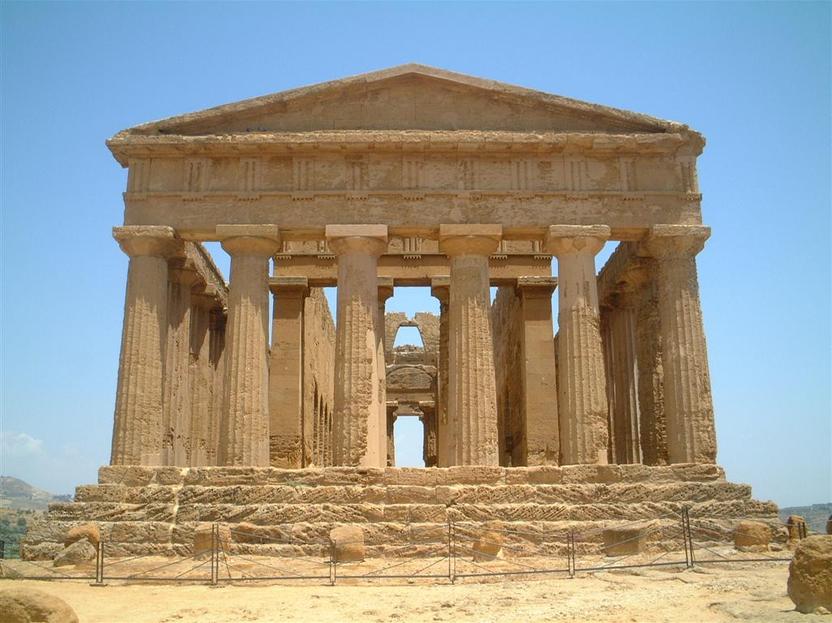 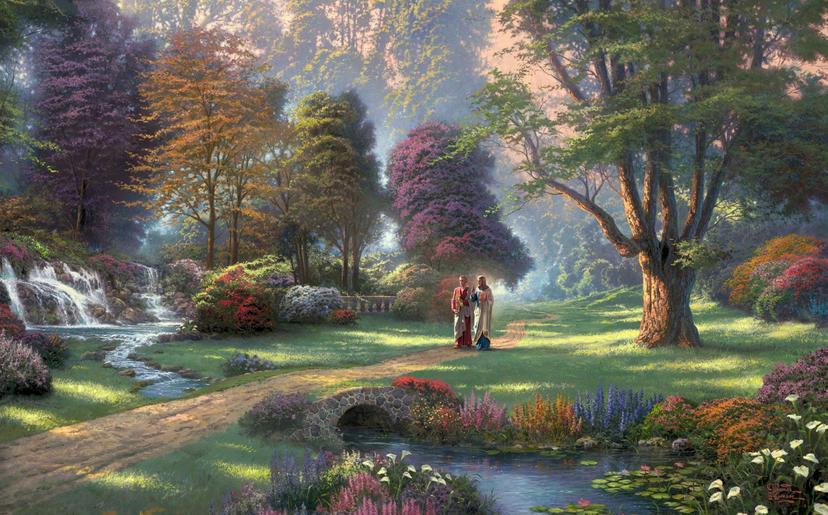 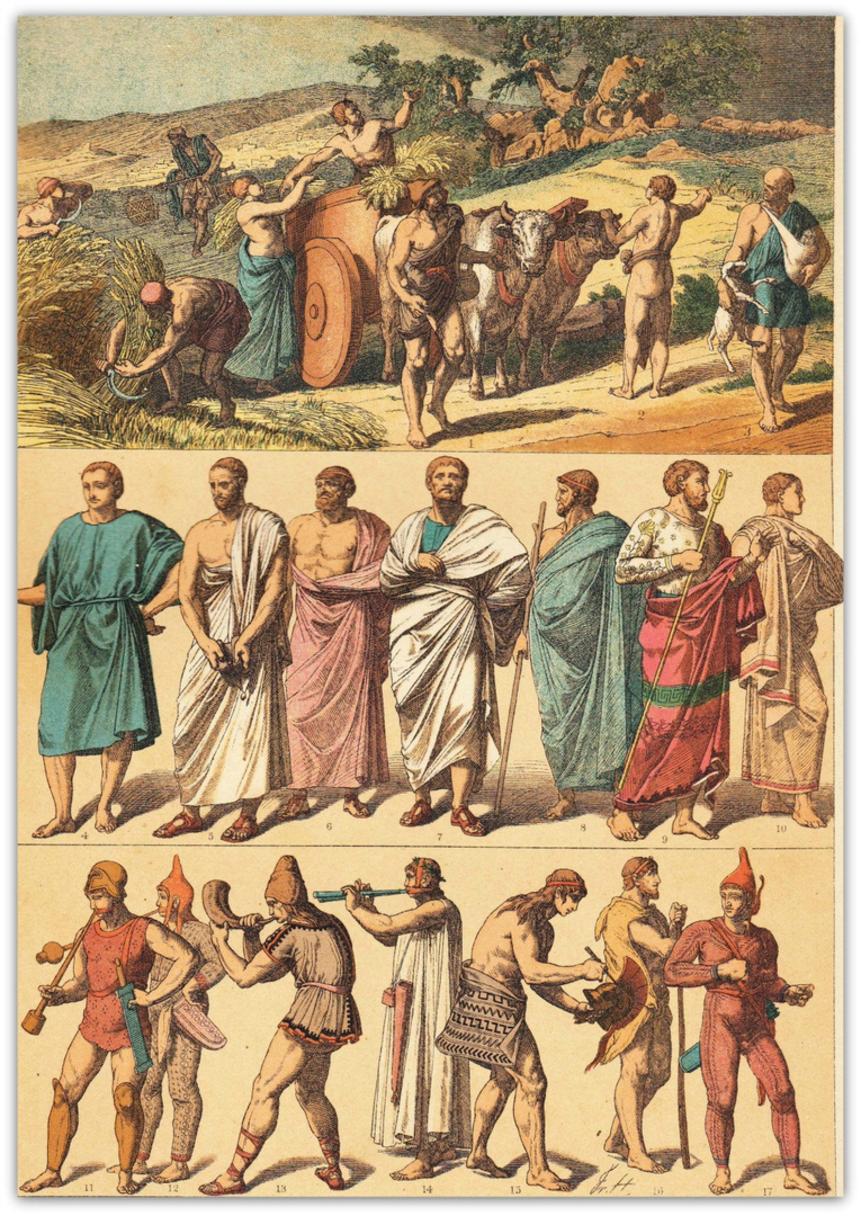 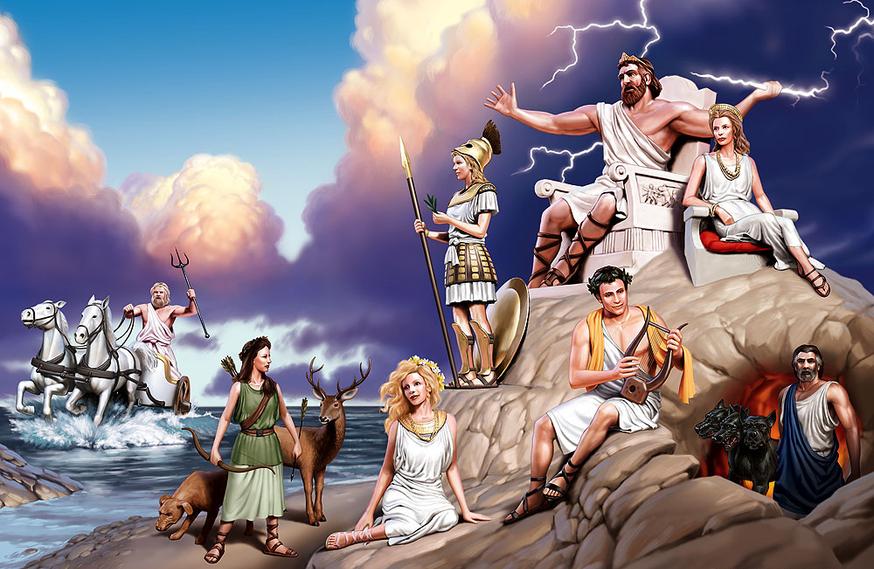 Ancient Greece was a civilization belonging to a period of Greek history from the Greek Dark Ages of the 13th–9th centuries BC to the end of antiquity (c. 600 AD). Immediately following this period was the beginning of the Early Middle Ages and the Byzantine era. Roughly three centuries after the Late Bronze Age collapse of Mycenaean Greece, Greek urban poleis began to form in the 8th century BC, ushering in the period of Archaic Greece and colonization of the Mediterranean Basin. This was followed by the period of Classical Greece, an era that began

with the Greco-Persian Wars, lasting from the 5th to 4th centuries BC. Due to the conquests by Alexander the Great of Macedonia, Hellenistic civilization flourished from Central Asia to the western end of the Mediterranean Sea. The Hellenistic period came to an end with the conquests and annexations of the eastern Mediterranean world by the Roman Republic, which established the Roman province of Macedonia in Roman Greece, and later

the province of Achaea during the Roman Empire.

Classical Greek culture, especially philosophy, had a powerful influence on ancient Rome, which carried a version of it to many parts of the Mediterranean Basin and Europe. For this reason, Classical Greece is generally considered to be the seminal culture which provided the foundation of modern Western culture and is considered the cradle of Western civilization. The Parthenon, a temple dedicated to Athena, located on the Acropolis in Athens, is one of the most representative symbols of the culture and sophistication of the ancient Greeks.

331 BC  :   Alexander destroys Persepolis, ending the Achaemenid dynasty
329 BC  :   A new temple to Apollo is built at Delphi
325 BC  :   Earliest papyrus written in Greek
324 BC  :   Alexander invades the Punjab in India
324 BC  :   Comedies of Menader
323 BC  :   Alexander dies, is succeeded by Antipater, but empire rapidly collapses
317 BC  :   Cassander kills Alexander's son and seizes power in Greece and Macedonia
310 BC  :   The scientist Aristarchus believes in a heliocentric world
300 BC  :   Euclid writes the Elements of Geometry
300 BC  :   Epicureanism, Epicurus and stoicism, Zeno
297 BC  :   Cassander dies
290 BC  :   The Colossus of Rhodos is built
279 BC  :   The Gauls invade Greece
277 BC  :  Antigonus II Gonatos defeats the Gauls and becomes king of Macedonia
274 BC  :  Pyrrhus invades Macedonia and Greece
272 BC  :  Antigonus II Gonatos defeats Pyrrhus
261 BC  :  Antigonus II Gonatos conquers Athens
250 BC  :  Scientist Archimedes
239 BC  :  Antigonus II Gonatos dies and is succeeded by Demetrius II
229 BC  :  Athens achieves independence
216 BC  :  Philip V of Macedonia allies with Hannibal of Carthage
197 BC  :  Philip V of Greece is defeated by the Romans at Kynoskephalai
179 BC  :  Philip V dies and is succeeded by Perseus
168 BC  :  The Romans defeat Perseus and end the Antigonid dynasty
149 BC  :  The Romans annex Macedonia as a province
89 BC   :  Mithriades VI of Pontos leads a revolt against Rome
86 BC   :  Roman general Sulla defeats Mithridates and burns Athens
30 BC   :  The Romans conquer all of Greece
49 AD  :   Paul preaches Christianity in Greece
50 AD  :   "Lacoon"
100 AD :   Historian Plutarch
100 AD  :  Hippalos discovers Arab sea men secret effects of monsoons on sea travel
393 AD  :  Theodosius forbids Olympic Games, shuts down the Olympia temple of Zeus
462 AD  :  Statue of Zeus, moved from Olympia to Constantinople, is destroyed by a fire

529 AD  :  Roman emperor Justinian shuts down the Academia of Plato

Greek Mythology is the body of myths and teachings that belong to the ancient Greeks, concerning their gods and heroes, the nature of the world, and the origins and significance of their own cult and ritual practices. It was a part of the religion in ancient Greece. Modern scholars refer to and study the myths in an attempt to shed light on the religious and political institutions of ancient Greece and its civilization, and to gain

understanding of the nature of myth-making itself.

Greek mythology has had an extensive influence on the culture, arts, and literature of Western civilization and remains part of Western heritage and language. Poets and artists from ancient times to the present have derived inspiration from Greek mythology and have discovered contemporary significance and relevance in the themes.

Greek mythology is explicitly embodied in a large collection of assorted interpreted narratives, and implicitly in Greek representational arts, such as ancient vase paintings and votive gifts. Greek myth attempts to explain the origins of the world, and details the lives and adventures of a wide variety of gods, goddesses, heroes, heroines and mythological creatures. These accounts initially were disseminated in an oral poetic tradition ; today the Greek myths are known primarily from ancient Greek literature. The oldest known Greek literary sources, Homer's epic poems Iliad and Odyssey, focus on the Trojan War and its aftermath. Two poems by Homer's near contemporary Hesiod, the Theogony and the Works and Days, contain accounts of the genesis of the world, the succession of divine rulers, the succession of human ages, the origin of human woes, and the origin of sacrificial practices. Myths are also preserved in the Homeric Hymns, in fragments of epic poems of the Epic Cycle, in lyric poems, in the works of the tragedians and comedians of the fifth century BC, in writings of scholars and poets of the Hellenistic Age, and in texts from the time of the Roman Empire by writers such as Plutarch and Pausanias.

Archaeological findings provide a principal source of detail about Greek mythology, with gods and heroes featured prominently in the decoration of many artifacts. Geometric designs on pottery of the eighth century BC depict scenes from the Trojan cycle as well as the adventures of Heracles. In the succeeding Archaic, Classical, and Hellenistic periods, Homeric and various other mythological scenes appear, supplementing the existing literary evidence.

"Myths of origin" or "creation myths" represent an attempt to explain the beginnings of the universe in human language. The most widely accepted version at the time, although a philosophical account of the beginning of things, is reported by Hesiod, in his Theogony. Many assorted interpretations have been told from folklore to written narratives. The myth begins with Chaos, a yawning unknown nothingness. Out of the void emerged divine beings as Eros love, Nyx desire, Gaia earth and other primordial divine beings, as the abyss Tartarus, and Erebus. Gaia gives birth to Uranus sky, who then weds her to fertilized her with his seeds of creation. From that union were born first the Titans ; six males: Coeus, Crius, Cronus, Hyperion, Iapetus, and Oceanus ; and six females: Mnemosyne, Phoebe, Rhea, Theia, Themis, and Tethys. According to Plato, the deities Phorcys, Cronus, and Rhea were the eldest children of Oceanus and Tethys.

After Cronus was born, Gaia and Uranus decreed, no more Titan children were to be born. They together also created the one-eyed Cyclopes and the Hecatonchires or Hundred-Handed Ones, as powerful labor workers of their earth kingdom. This created labor force is rejected by many and  eventually abandoned into the underworld Tartarus, by Uranus after the labor work of their earth kingdom is complete. This made Gaia furious. and Cronus, Gaia's youngest son of the golden age of grain and humanity, was then convinced by Gaia to eliminate his father Uranus from Earth's creative boundaries. He does this, with the help of Gaia's deception and he becomes the Titans ruler with sister wife Rhea as his consort, and the other Titans became his ruling earth court.

"A motif of Father against Son conflict" was repeated when Cronus was confronted by his son, Zeus. According to Hesiod, Cronus sired six children with Rhea : Hestia, Demeter, Hera, Hades, Poseidon, and Zeus in that order. Gaia and Uranus told Cronus that just as he had overthrown

his own earth father, he was destined to be overcome by his own child.

Because Cronus had betrayed his father Uranus for his mothers desire, he feared that his off springs would do the same to him, and so each time Rhea gave birth, he snatched up the child and enslaved them to prison within his home. Rhea hated this and deceives him by hiding Zeus and wrapping a stone in a baby's blanket, which Cronus believes is Zeus.

Rhea gives birth to Zeus in Crete, and hides her infant son in a cave on Mount Ida. Her attendants, the warrior like Kouretes and Dactyls, act as bodyguards for the infant Zeus, helping to conceal his whereabouts from his father. Zeus is then nurtured by nature and when grown, he returns to his parents home and feeds Cronus a drug, which inspires his nature to release Rhea's other children from their enslaved prison bondage. Zeus then with his siblings, challenges Cronus to war for the kingship of the gods. With the help of the powerful Cyclope laborers, whom Zeus freed from the Tartarus underworld, Zeus and his siblings were victorious. Cronus and the Titans were then hurled down to underworld imprisonment in Tartarus.

Zeus is then further plagued by the same concerns of "Father against Son conflict", for earth rulership, after a prophecy that the off spring of his first wife, Metis, would give birth to a "greater god than he", to rule over him. Therefore earths humankind golden grain age creations are subjected to the ruling gods assorted conflicts of creation and empowerment. As mothers deceive sons to war against fathers, within the evolution of earth god's ruling empowerment's. 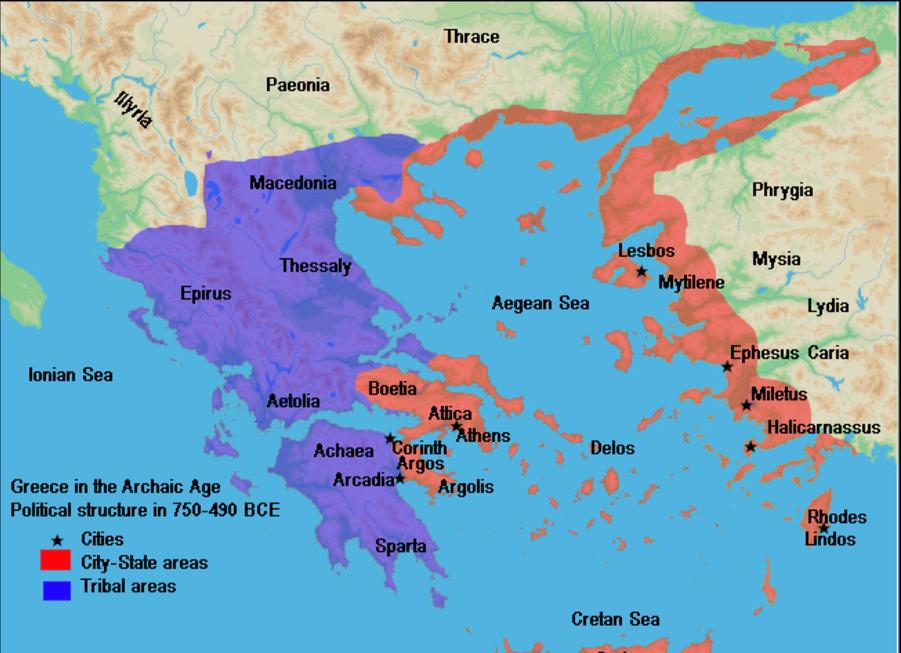 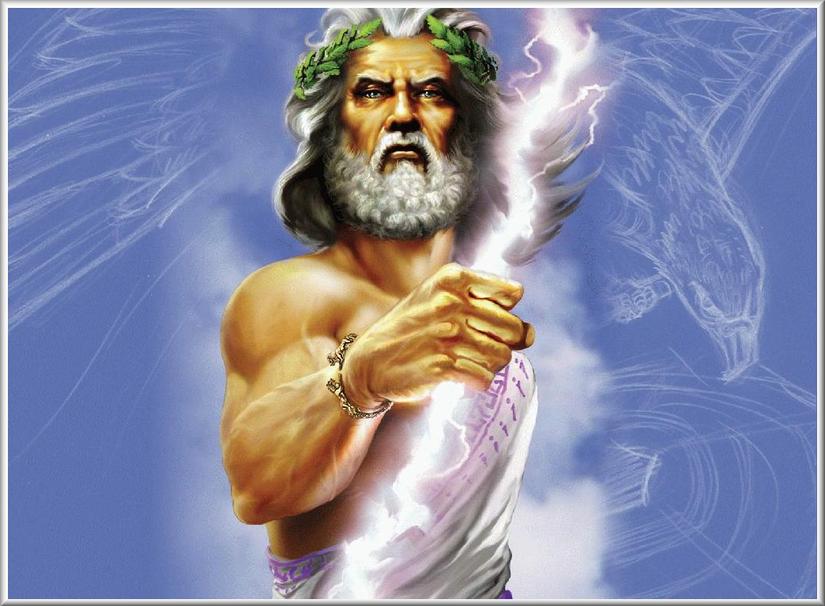 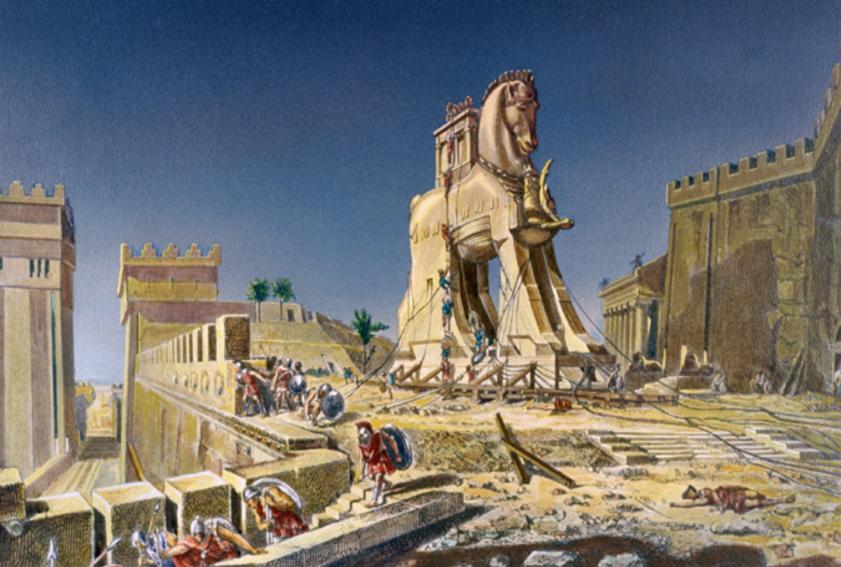 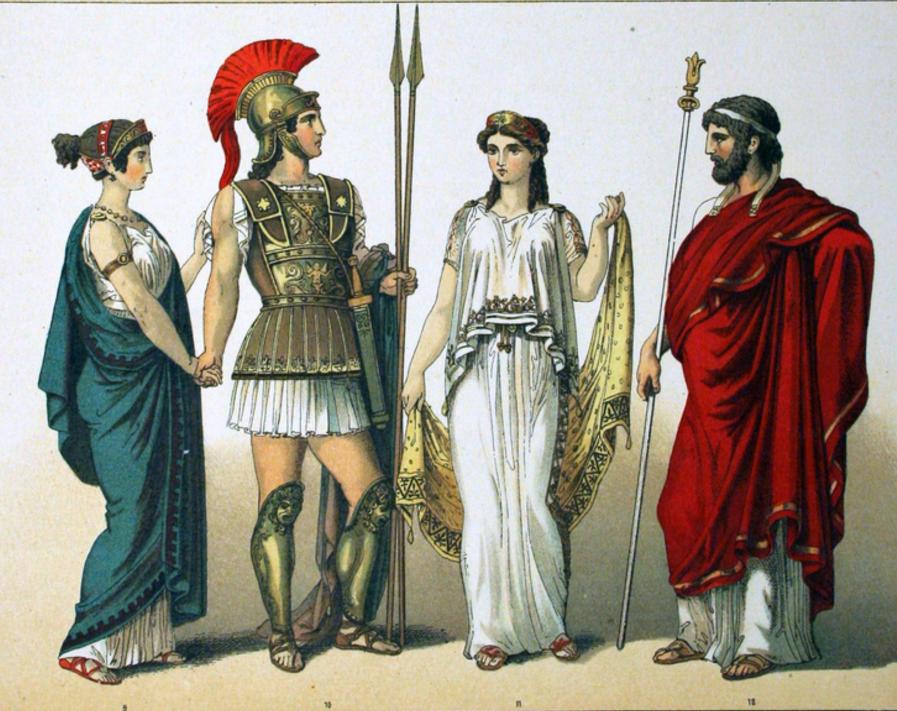